Finnish article about book project and a book extract

I wrote an article about how the book project happened from start to this point! This one is in Finnish. The Finnish Association of Software Testing (FAST -  Sytyke TestausOSY) published it in their Laatu and Testaus (Quality and Testing) magazine this week. Writing the article was a great exercise of looking back and looking into the future at the same time. I've reflected similar themes in my recent conference presentations. I also reflect what I've learned about how children learn, and specifically how they learn about software testing.

If you want to take a look at the article and my book writing story, please read it in this link. I'll later have an English version out, for those who prefer that language.

Bit of news: the Finnish version of the book is now in the printing house. I've just seen and reviewed the last proofs this week. It will be published on Dec 1, 2020, as announced. As for the English version, the tech edit stage of the English publisher is still going on.

The book extract this time is here. In the same fashion that I want to make software testing a bit better for future generations, you'll notice that characters in the story want to leave their mark into history.

Lord Walther was delighted with his castle. His ancestors had extended the castle over the centuries. It seemed that every generation wanted to leave its mark on the castle's history. He already participated in the tradition; the latest tower was called Walther’s Tower. Walther had a daughter, Sara. Walther thought with a smile that, no doubt, Sara’s Tower would later be built. Sara already seemed so accomplished as a child.

These towers might yet change their names. The tallest tower in the castle, one of the corner towers, was once called Esmeralda’s Tower, but today it was called the Dragon Tower. The name was no attempt to suggest that Esmeralda had been a dragon-like woman. On the contrary, she had been a very generous and kind Lady. The tower was the Dragon Tower because a big green dragon took over the top of the tower every few years.

The castle of the story is an enormous banking information system in the world of information technology. It has been in business for decades, but it has some annoying usability problems. The software is critical to the bank’s business, but it can be challenging to use or learn. 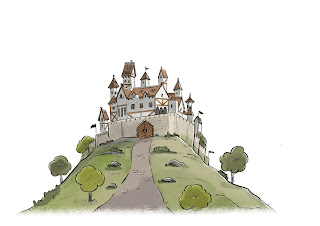