Dragons Out at EuroSTAR and a Learning excerpt from book

April 29, 2020
Today EuroSTAR announced the program of this largest software testing conference in Europe. My Dragons Out talk about how children learn about software testing is there! The conference takes place online this year due to the unprecedented Covid-19 crisis. Anyway, it will be great! So join me there to hear more about how children learn - and of course a bit about the book : )

As for today's excerpt from the book, I've chosen a piece about learning, as EuroSTAR theme for 2020 is Learn Together From Anywhere. This excerpt is from chapter four. It also features the name of the book!

--
When autumn arrived, the villagers put the logs in place. Each log was driven deep into the ground, and the builders filled the pit around the log to the ground level. In this way, each log stood firmly on its own. Each time there were ten logs upright, three crossbeams joined them. Mathilda's wood-building skills were needed. The work progressed nicely.

Be that as it may, the knights were right about the dragons. As soon as they had erected the first ten meters of the palisade, little dragons appeared to bother the construction team. The dragons were green and glittering creatures, about the same size as dogs. They had large leathery wings, with which they flew around with ease. They were breathing fire all the time. Albert was the first to notice them, for he had taken the habit of observing the construction on the roof of a nearby house. He guided the knights by shouting, "Dragons out!" Albert thought it would be better to drive the dragons away rather than kill them.

People notice that there are many different ways to defeat dragons. You can anticipate their activity. Similarly, many defects in software can be expected and prevented by considering them ahead of time. Albert notices the dragons first. This testing done by a user is acceptance testing. In many cases, the developers of new software rely on user testing, especially if the software is for a single company. 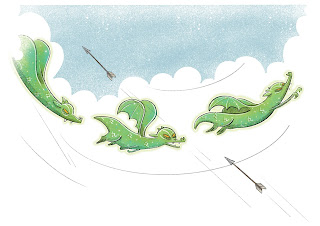